A downloadable tool for Linux

pyLinuxWheel is a graphical program developed in gtk3 to configure your Logitech Steering Wheel in Linux. Currently it supports the following features:

I have a Logitech Wingman Formula Force GP wheel and pedal set. When I first got it, it worked on just a couple games. I tried to make it more usable, but I am failing miserably. In Pylinuxwheel, the throttle pedal reads as the clutch, and vice-versa. NEITHER actually works in Supertuxkart, my go-to game for a 4yo. Got any ideas? I'm about to give up and buy a different set of cheap controls, like a Zion-2700. I read somewhere that the red ffgp set was made for xbox, and has different axes.

Hi odintdh (Alberto). I'm trying to use my G27 with the shifter in Grand Prix Legends under Manjaro. The problem I have is that GPL uses an intermediate program (gplshift) to allow that old sim to recognize the H-shifters. As a result, I don't know why, but under Linux, it requires the button "300" to be the first (i.e. the button1) the 301, the second, and so.

I could remap them but in js0 under joystick api instead than as an event* under evdev api, used by most of the support for Logitech wheels under Linux.  Do you think is there something I could do to overcame this problem?  I thought that maybe changing the udev rules, after your program write them, but don't know why, if possible.

Thanks a lot in advance. Marcos

Hi odintdh just installed PyLinuxWheel and the  udev rules by the book did the test and set profile then execute the ffb the wheel just went to 180 degress with no force feed back what am i doing wrong do i ned to install new-lg4ff tried to install that with no luck the kernel i am running is xanmod 5.8.14 on pop OS  1660 TI with ryzen 5 1600 24gb ddr4 mem at 2666mhz 1terabyte hdd.

To configure your steering wheel you have to set your desired values in the "Wheel" tab. "Test" tab is only to check if your wheel is working properly. Execute button from Test tab is only to test force feedback and it does not activate nor deactivate it. Force feedback support and other features are provided by the kernel driver.

PyLinuxWheel can set values as autocenter (resistance), gain, range, which are provided by the kernel driver and you don't have to install any driver as is included it by default.

new-lg4ff is a more advanced driver than the included in the kernel. Some windows games emulated with proton works better with new-lg4ff as it supports more force feedback effects. So new-lg4ff is a very good driver  and better than default kernel driver, but it is not mandatory to install it to have support for your steering wheel.

Did you let to pyLinuxWheel install the udev rules for your steering wheel?  pyLinuxwheel could show "Unsuported model" message if you don't have the udev rules installed for your wheel or if your kernel is too old to detect and support your model.

pyLinuxWheel install these rules at the begining of the execution but only if you give it permission. Other possibility is execute pyLinuxwheel with sudo.

Check if you have the udev rules properly installed, and check if Linux is detecting you steering wheel (you can use the lsusb command for this).If these two things are ok, but pyLinuxWheel does not work, open an issue in my gitlab page with the output of the pyLinuxWheel and the lsusb command.

On the other hand take in account that Ubuntu 16.04 is an old distribution and therefore with an old kernel. So you can have problems with your steering wheel that with a newer version could be fixed, as you can read for example in articles like this

Hi great app, I tested it for a friend that's new in Linux but after executing the appimage we get

And without the udev rules we can't change anything =(

If you can't install the udev rules you can execute pyLinuxWheel with sudo or root to give to pyLinuxWheel the enough privileges to configure Logitech driver.

If you follow these instructions you will have the udev rules installed and activated, so you will can use pyLinuxWheel without sudo or root.

Excellent, this release worked without any issues, thanks!!

Hi, I tried the 0.6.0-1.deb on Ubuntu 18.04.3 and it detected my G27 correctly. However when I go to the test tab and execute the force feedback test, it gives the following error:

Out of curiosity I installed the glibc 2.27 version and it seems to execute the force feedback test correctly.

just found your app for Debian and tried it. Looks very promising,  but im having little trouble with my wheel - Momo Force feedback - 2 pedals.

Also my wheel is detected as Momo Racing and not as Momo Force.

Can you pls check the issue.

Could you open an issue in my gitlab with the following information:

thank you very much.

This is a nice app and work fine with debian.

I made a new version to fix the problem with the pedals values (it was an error in how the values are stored and calculated) . Now you can press throttle and clutch pedals and get 100, but depending  on the hardness of the pedals of your steering wheel you may not get the maximum value (100). For example I never get 100 with the brake pedal in my Logitech G29 but I get easy 100 in clutch and throttle pedals.

now I try project cars because I use this game too.

Sorry for my bad English

Hi! Very important and nice project, thank you for this! But will there be a snap package for it?? I just can't seem to ever get these Appimage packages to run :/

Do you mark the excutable bit in the file?

Before to create a new release I have been study how to package PyLinuxWheel with  snap and flatpak. The problem is PyLinuxWheel needs to write in the sys interface to configure the steering wheel.  In flatpak this is not possible due to the sandbox design and with snap, only is possible if I use the classic confinement, but in this mode you need a manual approval to publish in the snapstore.

So in the end, for this release, I tried to create a more compatible AppImage. If you have a problem executing this new appimage, please, open an issue in my gitlab repository so I can fix it. 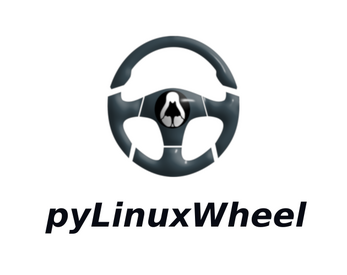 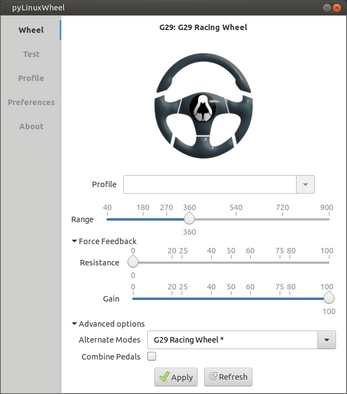 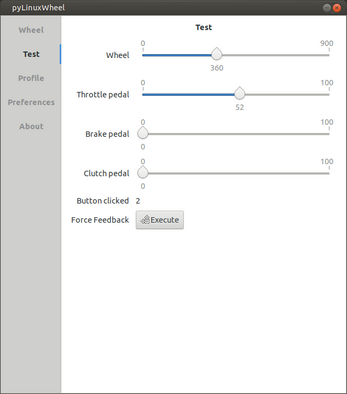 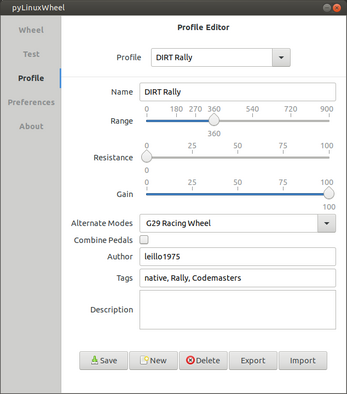 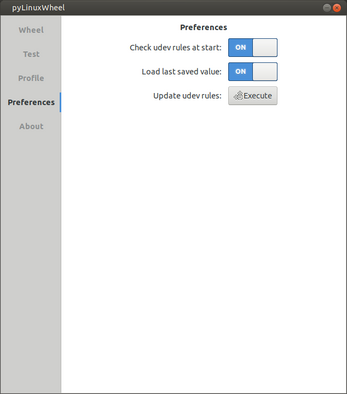